Up until fairly recently – maybe 18 months ago or so – I had no idea just how many independent whisky bottlers and blenders there were on the market. Familiar with the main brands, I have been surprised to continuously come across companies that have been bottling casks of bought-in whisky for decades, and an additional number of ones starting up.

One of the most recent ones I’ve stumbled upon has been The Meadowside Blending Company, run by father and son team Donald and Andrew Hart from Glasgow. Donald is a Keeper of the Quaich and long-time member of the whisky fraternity, while Andrew acts at the company’s roving brand ambassador. 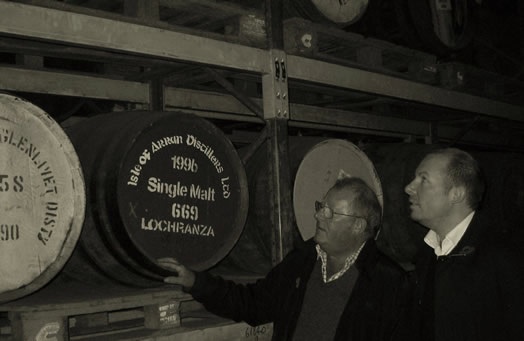 The Maltman single cask range is its staple output, but added to this is The Royal Thistle blended whisky, which recently picked up a gold medal at the Wine & Spirits Wholesalers of America competition.

I have recently had a chance to sample four releases from the company’s Maltman range. Here are my thoughts on them:

(p): Quite oily with almondy/marzipan notes, before a vanilla, biscuity hit and a dash of something grassy.

This is quite moreish. There’s just the right kick from the higher ABV to balance out the rich, vanilla heavy sweetness. It’s fairly sweet, so for someone who enjoys more of the ex-bourbon heavy whiskies, rather than someone looking for a deeper, woodier punch.

(n): Really quite strange: there are pleasant notes of half-baked cookies, but then something akin to cardboard and what I want to say is lard (something fatty), with a dash of rubbery pencil erasers, blueberry pie and coconut oil. One second I like it, one second I really don’t.

(p): Quite nutty (I thought hazelnuts) with some sweeter, vanilla and brown sugar notes but a dash of a rubbery, sulphury note that I wasn’t sure about. A bit of a chameleon this one.

While the main notes – biscuits, citrus, vanilla, coconut – are ones I always tend to enjoy in a whisky there was just something with this one I couldn’t quite get my head around and, ultimately, really put me off. However, that’s – as always – a personal reflection, as other people who tried it with me quite enjoyed it. Left me puzzled.

(n): First thought: ‘Wow! So appealing!’ With loads of apple skins, fleshy apple, white flowers, honey and heather this was a rich dram that walked the line between powerhouse and elegant. Lovely.

(p): Really oily in the mouth; peachy and peppery. There was a slightly green note of tomato stems, loads of sugary butter and vanilla pods.

It was fantastic to see Mortlach in this style, as in the past, I’ve often tried them matured in ex-sherry casks. The ex-bourbon cask made the whisky dance and really lifted it, but the heaviness that comes from a Mortlach was still there and the oily richness was wonderful.

(n): Intriguing this one. Slightly prickly on the nose but underneath lingered baked oranges/marmalade, dried golden raisins, cinnamon sticks, honey and burnt sugar. I added water to this one to try and diminish the nose prickle, but it stuck around; additionally, more cigar, orange and fleshy fruit notes came through.

(p): Chocolate and leather, brown sugar and burnt caramel, orange and cinnamon tea: a fruity, spicy hit. With water, a bit of an iced tea note comes through, along with vanilla ice cream and dusty wood boxes.

I really enjoyed this, though the Mortlach pipped it to the post in terms of this range. It was big, bold, fruity – really quite pleasant. One for cool autumn nights.