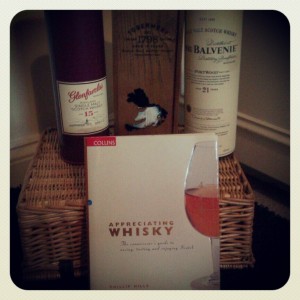 Recently, I went on a big whisky book buying splurge. I already had a few but I thought I’d up my collection and really delve into the subject even more because a) I love a good book and b) I love anything to do with whisky.

So, I went out and got some recommendations. One that Diageo brand ambassador Colin Dunn suggested I find was Appreciating Whisky, written by Scotch Malt Whisky Society founder, Pip Hills.

However, attempting to track down this book was no easy feat. It is out of print and the only copies available online were priced at £40 (out of this whisky lover’s budget).

Luckily, Twitter came to the rescue. I put a call-out for it online and within minutes I’d found someone based in London who had a copy. A snowy journey out to west London to borrow the book from a fellow drinks industry insider followed and I have been devouring this book ever since. It (and the others I ordered) showed up just in time since an ongoing cold has meant many whiskies I would love to sample are sitting patiently in my in-tray until I can smell properly again.

So, just what is Appreciating Whisky all about? To look at the title, it would be obvious: how does one appreciate whisky? But, once you delve into its pages, you realise it is far more than just a quick look at nosing and tasting, and rather, a full explanation on everything from organic chemistry to the olfactory glands’ functions and Scottish cultural history. 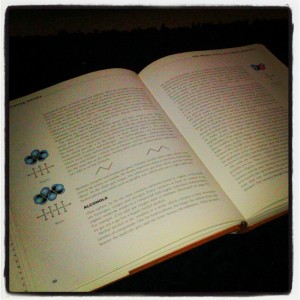 The book – published in 2000 – is fascinating. In fact, it made me remember just how much I enjoyed chemistry in high school. It is easy enough to comprehend for someone just coming into the world of whisky but provides in-depth features to entertain those who happen to know that little bit more. It is also cutting in many places, speaking out against people in the whisky industry who try to pull the wool over consumers’ eyes (or taste buds) and the actions of distilleries that Pip does not agree with. Whether you come to agree with him or not is up to you, but at least he voices his opinions clearly.

It can, at times, seem slightly haughty or overly ambitious and the chapter on tasting whisky (in which it is suggested that one should only taste in an environment ENTIRELY free of any other scents – from sweat to perfume, deodorant and furniture polish) is important but slightly fanciful for the average taster and made me question my times drinking whisky at the SMWS (which he founded) during which one finds oneself in small members’ rooms with loads of scents from the surrounding patrons. Still, this book is about teaching you how Pip believes you should learn to appreciate whisky, so his thoughts are worth listening to.

At times while reading it, I felt like I was back in school, and the notes on the interaction of various chemicals from the wood used in maturation is not something I could take in entirely during my first read-through. This is one I’d like to have on my shelf to be able to refer back to when I have in-depth chemical queries. However, I do have to return this copy to the kind gentleman who lent it to me after my cry for help on Twitter. It will, therefore, be one I shall be saving up to buy a copy of and I recommend it to whisky lovers new and old.

What whisky books should Miss Whisky add to her bookshelf? Let her know your favourites in the comment section or by dropping her a line on info@misswhisky.com